Origins of Yacon in Nepal—Part I

Yacon (Smallanthus sonchifolius), originally a South American plant grown for hundreds of years in Peru, Bolivia, and Northern Argentina, is a medicinal plant that has been cultivated in various parts of Nepal in recent times. However, this plant, commonly known as Bhui syau (Literally, ground apple) is still being explored for its properties, uses and markets. People eat the fresh rhizome like a fruit, which looks like a sweet potato and tastes like a pear to some. Yacon syrup is still not widely known, although some farmers have tried preparing it in the kitchen and selling it in the market without much success.

Yacon produces two sets of roots – the large edible tubers and propagation roots. The large edible roots are like energy storage for the plant, and the smaller propagation roots grow just under the soil surface and are the seeds for the following year’s growth. One single plant of yacon produces more than 10 saplings from those propagating roots, so the multiplication of yacon plants every year is common. The stem and leaves are used for preparing compost after harvesting. 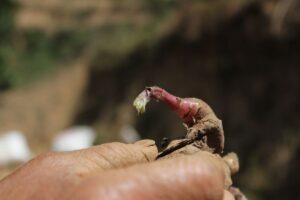 There is an oral story behind the advent of this new species in the country. It is believed that a tourist from France brought a small tuber more than 15 years ago, and left it in a hotel while he was visiting Pokhara, the most popular tourist destination in Nepal. It was grown in a pot, then in the garden. The hotel owner shared it with family and friends. It multiplied every year with awareness of its many health benefits, but it is still limited in its domestic consumption. Currently, it has been commercially cultivated in some districts of the mid-hills, to be used in a couple of processing facilities for syrup production in the Kathmandu valley outskirts. It has received some consumer attention, especially in the market targeted at the health-conscious (in terms of buying capacity), but is still struggling to stabilize. 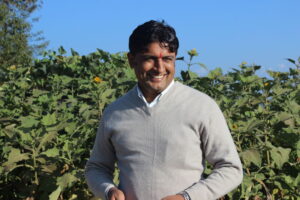 The exact place, growers and volume of the production data has not been gathered as yet (this will be updated eventually), However, it is clear that districts such as Baglung, Rukum, Sindhuplachok, Kabhre, and some of Eastern regions such as Panchthar, Ilam, and Terhathum, are cultivating yacon. The tubers can be red, orange, yellow, pink, or purple, with the more colorful ones found only in South America, where yacon originates[1]. Here in Nepal, pink, yellow, and red tubers have been found while processing, but most are white. Startup information claims that a farmer can earn four times more by growing yacon[2] than crops like ginger and turmeric. 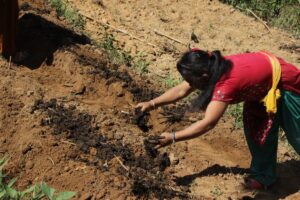 Yacon can be grown in areas where there is reasonable rainfall, moderate heat, altitude is not less than 1500m, and where the temperature should get to freezing in the winter. Normally it is sown in April-May and harvested in Dec-Jan once the land is completely frozen and the upper parts of the plants start dying. The yacon cultivated through Healing Herbs Nepal (HHN), Global Family Farm’s Nepal partner, comes from more than 1500m, in Eastern Nepal, where the soil is rich and the air and water are exceptionally pure, and where Kanchenjunga, the third highest mountain in the world, can be seen towering above the nearby foothills. 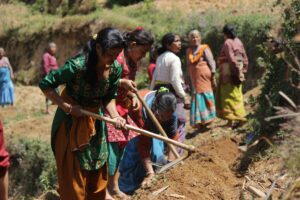 Currently, three to four small family farmers produce the yacon for one artisanal batch of yacon syrup at Kanchangangha Tea Estate and Research center cooperative, associated with Healing Herbs Nepal. It is a helpful cash crop for the family, often cultivated by the women, to help feed and clothe their children. Training in organic and regenerative agriculture techniques has also been made available to a woman’s group, Women for Human Rights, to help them produce yacon tubers as a new cash crop. (see WHR Blog).

With expanded marketing and production of the syrup and other derivatives of the plant, yacon could become one of the most lucrative crops to be cultivated commercially in the hilly region of Nepal,  and could bring better livelihoods to hundreds of farmers. 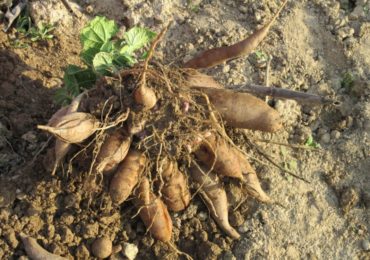 Origins of Yacon in Nepal—Part I

Yacon (Smallanthus sonchifolius), originally a South American plant grown for hundreds of years in Peru, Bolivia, and Northern Argentina, is a medicinal plant that has been cultivated in various parts......